Regret and Self-Blame in Healing

Feeling terrible at the moment, having eaten something with a higher glycemic index than I apparently should have.

A string of a few good days after so many tough weeks, and amnesia already was setting in about the tightrope those of us in adrenal recovery must walk. Managing energy output, being careful to eat more often, and eating high protein, low carb, no sugar, etc. I've been refining my weekday regime and Thursday / Friday were two of my best in a few months.

I ate too late in the morning, and not enough. Then I waited too long to eat lunch. Grabbed the most portable thing I could think of ... Avocado sushi roll. Harmless, right? Ate it in the car. Home by 1pm and ate a giant salad with egg, chick peas, peas, celery, beets... But that only lasted me until 4. By 4:30 I knew I needed to eat again, so I made a bowl of leftover lentils and rice. Too many carbs in a row. Adrenals not happy, and though I tried to follow up with some grilled chicken, the horse was already out of the barn. I'm left with that jangly, hyperglycemia feeling that I know will shortly be followed by the hypo version.

All of this is just context. On to the regrets.

As I've mentioned it has taken twelve years, possibly even the choices of the last thirty years to get here. The difference to me between this situation and something viral or genetic is that I can draw a clear line from many choices right to the front door of adrenal burnout. So I've found it unavoidable not to catalog, enumerate in detail those choices, reexamine them, second guess them, and generally stew.

I've been present with regret during sitting practice. I've breathed into it, and breathed out metta (loving kindness, self forgiveness). Late at night I have labelled thoughts of regret and watched them arise, dissipate, only to arise once more. Delusions are inexhaustible, I vow to transform them. But nobody said it would be easy. Doing my level best not to allow regret to mature into self-blame, and finding that difficult as well.

The fact is I've only become aware of this as a condition, with potential remedies, in the last two months. Since then I've made some pretty drastic behavioral and diet changes, seen some great progress, and have a long term plan for recovery. I recognize that every erg of energy wasted on regret is something I can't put towards recovery.

But as I mentioned in one of my earlier posts, we live in a culture where anything but the manic exuberance of youth, or the caffeinated accomplishment-driven adult equivalent has the odor of failure about it. So you feel even more badly about feeling terrible.

All of that is also just context. On to the healing.

Taking another page from Maria at Restco's playbook, I just want to encourage anyone who is struggling in the same unmapped territory to take a deep breath, or several, and know you are not going through it alone. This issue is endemic and largely masked by coping strategies from the obviously bad (caffeine, alcohol) to those as seemingly healthful as overwork, working out too much at the gym, and shoring up flagging energy with fruit and juices. All of which just dig our adrenals further into a hole.

There is a prescription, and it is long term, amounting to changing our way of being in the world, while also rebuilding the nutritional foundation of our bodies. And it starts with rest.  Pema Chodron says "The only thing that exists is the continual opportunity to either open up to what's happening, or shut down." Time to open up and be present.

Paraphrasing here, and aware of the gentle irony: 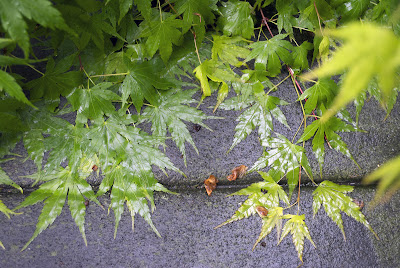 Posted by StoneCutter at 7:04 PM