I recently signed up for Tricycle magazine's daily email.  It has only been a few weeks, but already several times I've found their wisdom snippets striking close to home.

This one was from a 1992 interview with Thailand's Sulak Sivaraksa. Just an excerpt:

In America and Europe, everyone is very active. But if you become too active, you lose the essence of Buddhism. You only have the Buddhist labels. One must cultivate peace to be compassionate. Without this, what you do, even as an 'engaged Buddhist' is just a lot of activity with no good purpose. 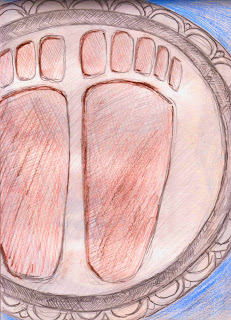 For those of us who take right livelihood all the way over to the do-gooder extreme, it's hard not to take -- if not pride, at least solace -- in the feeling that no matter how badly one may be screwing up in any other realms of life, at least I got this part right.

And then this very difficult pill to swallow, that anything done to extremes is still life out of balance, and thus not really right livelihood. If it harms you, your family by extension, and those you seek to serve.

I read How Can I Help? by Ram Dass probably three times in my early career, trying to push the very separate circles in the Venn Diagram Of My Life into closer congruence.  A life of service called and who was I not to answer?

When I ran into Bernie Glassman's Instructions to the Cook, I had to sit down in the middle of the bookstore aisle, the sense of recognition and resonance was so strong. The Supreme Meal. Hungry Ghosts feeding each other. Social action, social enterprise, Bearing Witness, engaged Buddhism. Sign me up!

But that sneaky Protestant work ethic, "just do your best, honey" messages, and thorough training in perfectionism ... well what exactly is "our best" and what is the point past which it is actually unhealthy to throw energy even in an unassailably good direction?

What Sivaraksa points out is that if we don't embody peace then we may actually be doing damage as we seek to do good.

Upon reflection I see that after a few relatively solid years I reached the point where I approached my work as work. Fulfilling certainly, but I had dropped my practice more than a decade ago, and my efforts to lead a life of service eventually had no foundation.

Something to sit with.

And the cosmic ha ha here, having scanned the top bookshelf and opened the Ram Dass book again tonight, flipping through the sections I had dog-eared... the second to last chapter is titled: Burnout.  Guess I'll just be re-reading that one later tonight.
Posted by StoneCutter at 7:56 PM