This morning I had cause to wake up thinking about the commute-time of your average bumble bee.

What time would he have to fly out of the hive in order to arrive at the flowering bush outside our bedroom window by 6AM sharp? No weekend hours for the hard working bee, no sir. Nor did he care that I wanted to sleep at least a smidge longer on my Sunday morning...

It has been unseasonably hot the last two days, and since we have no air conditioning, we sleep with the window open. I've been reading Dogen's exhortations about continuous practice in the evenings.  So the stage was set when I awoke this morning to incessant buzzing for me to notice that my instinctual hindbrain would not believe that a screen between my head and the bee a half-foot or so away should allow me to safely continue sleeping.  Nope, instinctual hindbrain said: Bee = danger. Wake up!

Meanwhile discursive brain immediately kicked into gear as I cracked my eyelid open just wide enough to check my watch. Great scott that bee is punctual, what time did he have to leave in order to get here and get busy this early...at exactly 6AM?

If this had happened on almost any other day, what would have come next is resentment, spinning about the lost sleep, the endocrine system cranking into gear so I could leap into action. As if there was anything I could do to keep that bee, and his brothers, from their appointed rounds.

But this morning, having been hearing about colony collapse and all the related theories about mites and/or pesticides, I was just glad to hear them doing their thing.

And it was only a small step from there to ask myself, in the spirit of continuous practice, could I transform my instinctual hindbrain alarm at hearing that buzzzzz so close to my head, the analytical brain, the take-action conditioning -- and just be grateful that these extraordinary motes, so essential to our ecosystem, were making those pollen connections in our little corner of Indra's net?


The Vajrayana path leaves nothing out, no matter what. Nothing can be rejected. We simply transmute our mind and its experiences by recognizing their actual nature... to practice and attain genuine realization even in our usual context. To that end, Vajrayana practitioners use "sacred vision" with which they recognize that this world is already fundamentally pure; it is already a pure land, a realm where all Buddhas and Bodhisattvas are visible and the Dharma is understood. Likewise, they consider all beings fundamentally Buddhas and that there is no real distinction between samsara and nirvana, which are merely appearances. In the practice of this sacred vision the world is meditated on as a pure land and beings as aspects of Buddha; all forms are enlightened aspects, all sounds are mantra, and mind is pure mind.

I don't know if I'm committing a hopeless oversimplification, but Dogen's continuous practice and this description of the Vajrayana path seem quite resonant. It works for me. 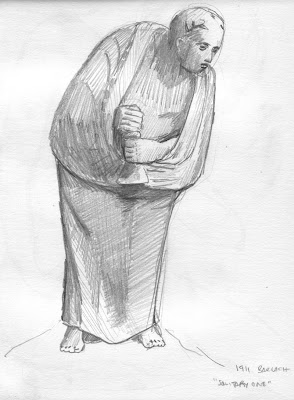 Posted by StoneCutter at 8:00 PM