I was all set to post this evening and then I read the latest on Dalai Grandma, called the Nirvana Fallacy.  Really so well put, what more is there to say?

And yet as Katagiri Roshi puts it "You have to say something!" 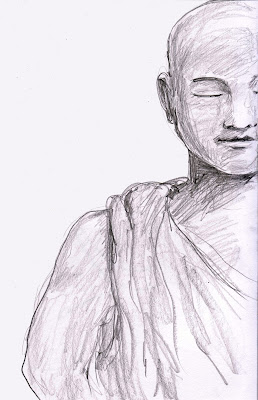 One of the quotations she posted this evening points out that many of the lineages were practiced, codified and transmitted not by rarefied intellectuals, but by regular folk. Nobody closer to the absolutely unavoidable wrack and struggle of everyday existence, who better to practice with it and from that practice generate wisdom worth sharing?

wife, daughters, friends this is for you satori
is mistake after mistake

So very guilty of putting an intellectual distance between myself and something that called me. I studied Buddhism for years academically until one of my teachers required me to meditate in order to pass his course. That was the crack opening the door. Still kept it at an academic distance until I found Joko Beck. Her two books helped me understand among many other things, that being present with this absolutely pedestrian moment, that is the practice. Later Roshi Halifax and Pema Chodron further underscored that perspective.

In one of Pema's talks, a woman during Q&A says something along the lines of "Lately I just want to chuck all the day to day frustrations of my life and set sail on the great burning ship of the Dharma!"

"Oh honey..." says Ane Pema, with that grandmother compassion that does not spare as it cuts. "That everyday life you're talking about leaving, that IS the great burning ship of the Dharma."

Even knowing that, for several more years I felt that one couldn't truly practice unless one were to take vows and become a monk or a nun. And one day while I was very unattractively pining for such a life it took a young Tibetan monk, very politely, putting my nose in it for me to recognize, as he put it "My life, your life, no difference. Just the practice."

As a householder the last ten years with two children...many very full episodes. In my more wry moments I had to wonder if a lot of what the younger monks are put through is so they can get to recognitions that Householders get for free at 1:30am after a week of no sleep because the baby is still sick. More ego and story but it made me feel better at the time, joking to my wife "hey we're having our own sesshin."

Become one with whatever you are doing. That is the way.
Isshiki ino bendo
To practice the way with wholeheartedness.
--Dogen Zenji
Posted by StoneCutter at 7:55 PM

Email ThisBlogThis!Share to TwitterShare to FacebookShare to Pinterest
Labels: Practice